How the best reviewers get the most insight using Filtered

Written by Oliver Weng
Updated over a week ago

It's hard to predict if someone will be a great fit at a company. That's why candidates are often put through multiple rounds of multi-hour interviews, do take-home tests, and need strong referrals.

Filtered aims to make that easier by giving you the tools to match certain candidate behaviors with their associated future success (or failure) at your company.

Below are four key places to review in Filtered that will help you better understand any candidate:

1. Listen for specific details about doing past work

Despite their best intentions, every candidate exaggerates their skills and experience. That's because the act of getting a job is marketing; they don't want to say something that would make them less likely to get an offer!

However, you'll need to see through the big fluff words when listening to a video response. For example:

"For my senior project, I built a webservice on AWS using NodeJS which got menus from restaurants near the campus. It took a long time.... but I think it came out pretty great."

is more likely to be fairly close to reality than a statement like:

"For my senior project, I built a webservice on AWS using NodeJS and MongoDB for the database and it was deployed to amazon."

The signal is the phrase "It took a long time". That candidate actually has an opinion about what it was like to be present during the experience. Unless that candidate is a brilliant liar, I would put money on the fact that they put in some honest hours to finish their project and learn things in the process. For the other candidate, it's better to be skeptical and ask follow-up questions about that topic.

Because of this fact, it's recommended that you ask open-ended questions related to previous experiences like working or school instead of trivia-like questions with a right or wrong answer. You can imply someone's level of competence ad culture fit by understanding how much exposure they have had in the past to similar working environments to your own.

Blue triangles on the code pad timeline are where Filtered detected a highly-relevant tab was opened. These tabs will be things like:

For example, the image below shows that the candidate viewed two websites in the first few minutes of their test which provide an answer to the beginner question they were being given ("find the smallest number in a list"). This is usually a negative sign: 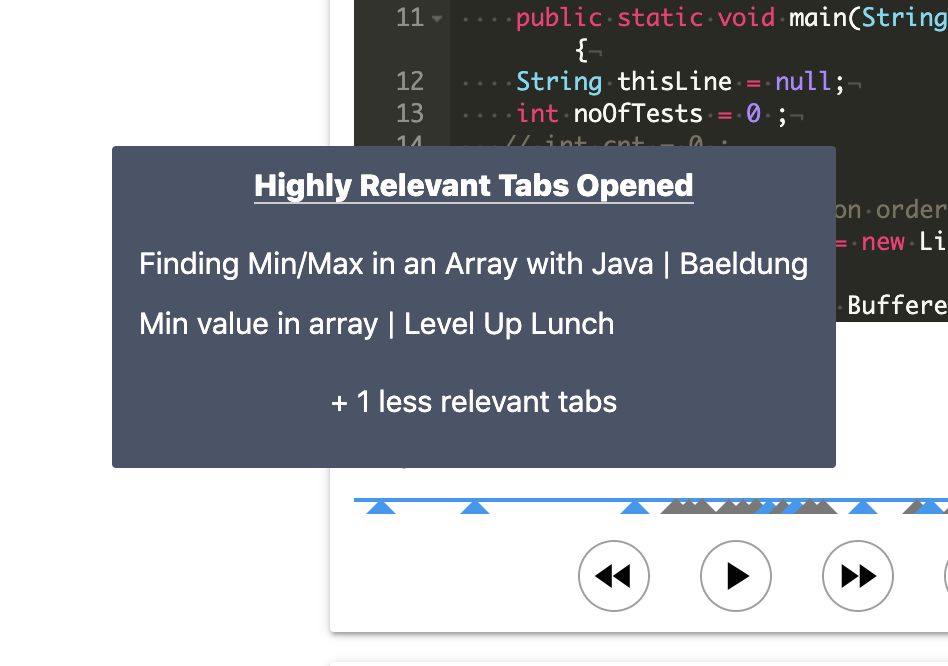 On the other hand, this candidate viewed a page on a coding forum (StackOverflow) which helped them do a simple type conversion in JavaScript. In small amounts, this is seen as normal, or even encouraged behavior because: 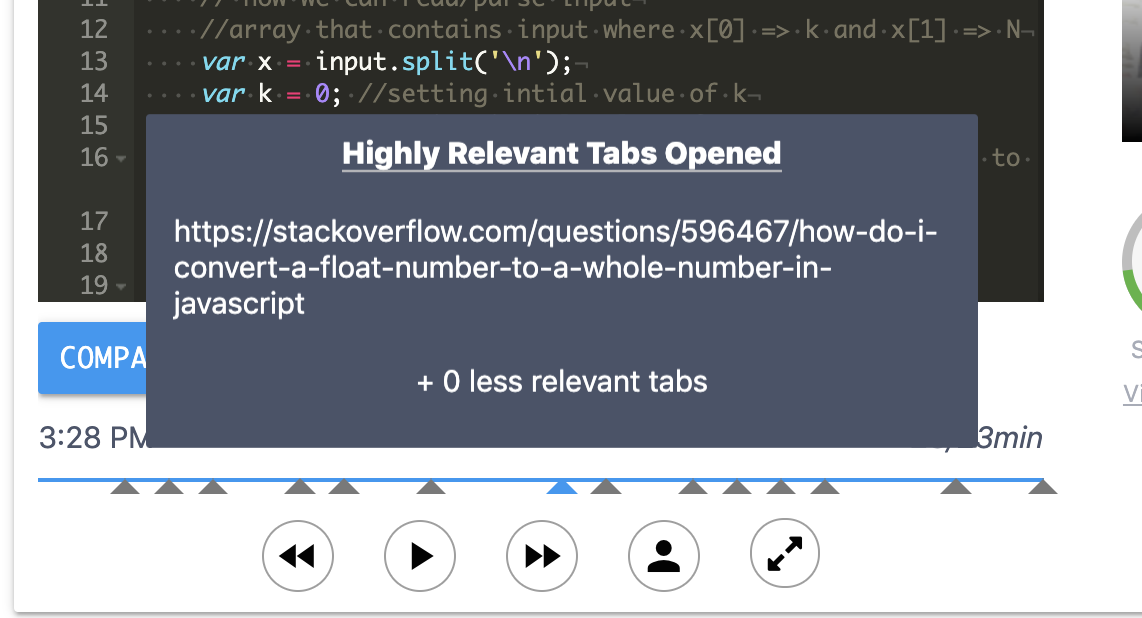 Even very senior developers forget basic things about programming and have to reference the documentation. They are focused on solving larger, harder problems and lean heavily on docs like it is a box of tools. The timing of and content within the opened tabs is the most important part when making a judgement call.


3. Watch the parts of the timeline where they compiled a lot

Grey triangles in the code pad timeline represent compiles (literally clicking the "run" button during the test to see if their code did what was intended).

The timing and clusters of these triangles typically represent behaviors. For example: 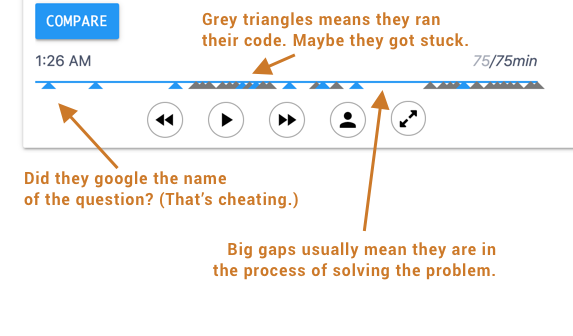 Once you pick a timeline point to review, you can start the playback to see which things were changing.

One thing to note: 99.9% of challenges cannot be fully solved by only compiling one time. If you see this from a candidate who scored well, it means that the candidate either completed the work in their own IDE and transferred it to Filtered, or the candidate found an answer online that they dumped into the code pad.

4. Scan their code for evidence of best practices

Just like the rings of a tree are able to show its age, small details in the code can show you someone's level of experience.

My personal favorites are: 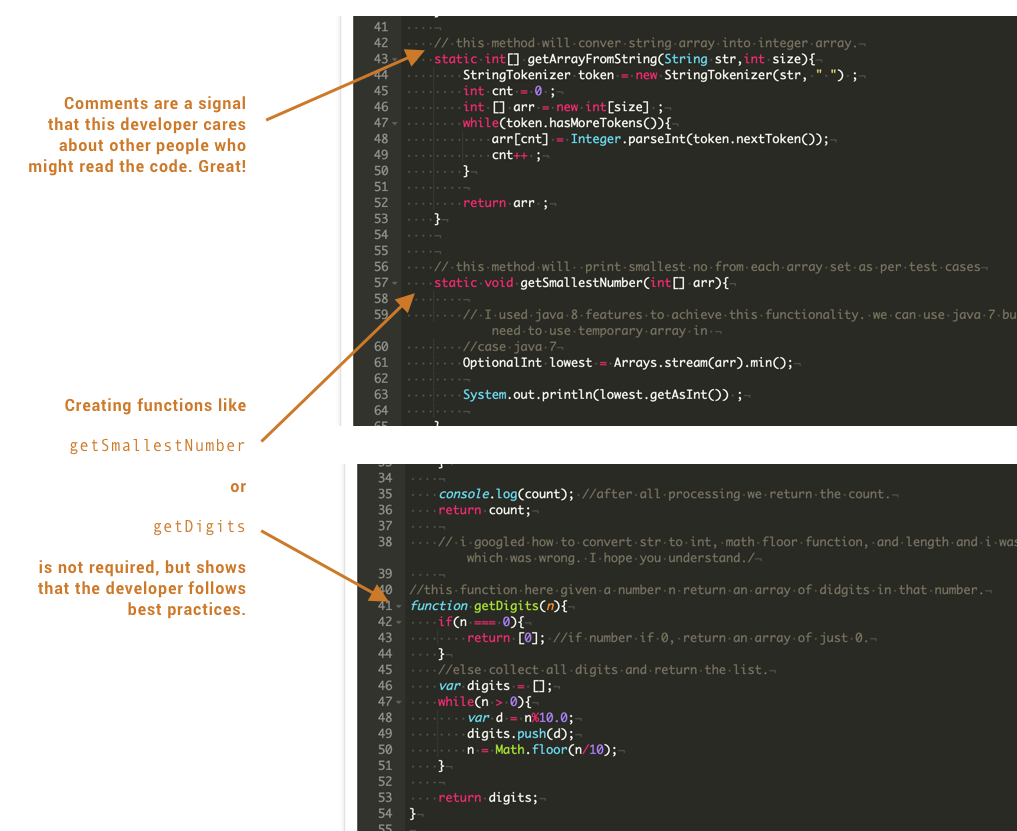 Reach out to us at support@filtered.ai

Did this answer your question?